We were devastated at the time, but in retrospect when our landlady phoned us on that Sunday afternoon in late March and gave us 60 days to vacate our apartment, it was the best thing that could have happened to us. It is now late July and we have just celebrated Independence Day. The house is starting to look very lived in, although we are still unpacking boxes, some of which have been sitting unpacked for more than two years. I can say with absolute certainty that we are both extremely happy in this house, and even happier that all of the paperwork is now over and we have the Deeds in our possession. 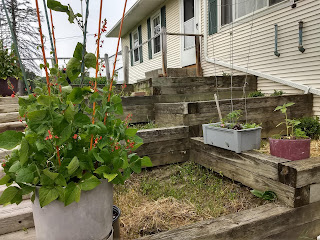 The country is warming up for the 2020 election, and more than 20 Democratic hopefuls are campaigning hard, with the first of the debates now behind us. It is no secret that I cannot stand that idiot Trump. More than 10,000 lies have been recorded since he took office. In fact, he lies so often that it has become patently obvious by his lead in when a lie is about to be told. I didn't really understand the political system in America before I arrived here five years ago. But having now witnessed it first hand, I do understand it. I know that nothing will ever persuade me to vote for any Republican candidate. At the same time, I will stick by the Royal Navy ruling for mess dinners - no discussions of a political or religious nature in our house. 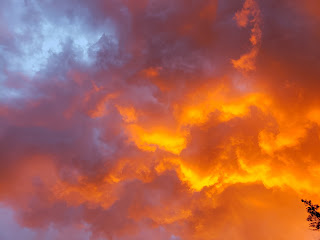 The road our house is on is named Sunset Drive, and the above picture, taken a couple of weeks ago, is a good example of why. For a change, this year, we are going to be able to host the Thanksgiving Dinner in late November. One of our rooms is easily big enough to seat more than a dozen people - and our stove is massive. Yesterday we picked up a garden table with 6 chairs and a couple of matching loungers for a very reasonable price, and we have a dining room table and six chairs as well as some other furniture on hold for us. 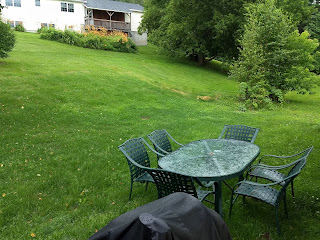 The yard is starting to look good too. We have removed a rather ugly fence, originally erected to keep in small children when the previous owners were running a day-care center here. We have put out bird feeders and so far have seen a pair of red cardinals and of blue jays and a  nesting robin as well as a number of species that I do not know. One songbird wakes me every morning at about 0430 with the most beautiful singing I have ever heard. Other wildlife includes a grey squirrel and, next door, a groundhog or woodchuck. No chipmunks, skunks, bears or deer as yet though!