It has been six months since I wrote my previous post - six months too long. The last time that I wrote I had just become a United States citizen. This time Liz and I are celebrating closure on a property in Saint Johnsbury, Vermont. We took closure on June 3rd and moved into our new property on the following Saturday.  At the end of March, I had received d a telephone call from our landlord giving us sixty days to vacate the apartment. Not that we had done anything wrong. No! The landlord and his wife have gotten divorced and he required our apartment, it is the largest in the complex, for himself, his mother and granddaughter...

It has always been my belief that things happen for a reason, and so it was in this case. We searched the region for a suitable apartment to rent, but they were each either too small, too expensive or in an area of town inhabited by a lower class of people or drug addicts. So I suggested that we look at houses that were available for purchase, which we did. At the same time, we investigated the possibility of obtaining a mortgage. and were quite surprised when we became pre-approved. 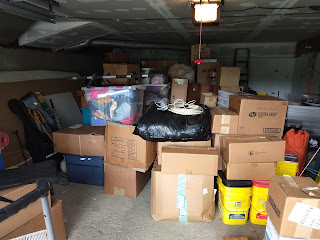 So here we are on our 10th day. We have a garage full of boxes from the apartment and are slowly working our way through unpacking them, and a basement that still has a bunch of unpacked boxes left over from two years ago when we vacated 200 Sampson. When we viewed this house there was over a foot of snow on the ground, and so our offer was based only on what we were able to see.


The closure was not by any means cheap, and boy was the lead-up complicated and full of red tape. The purchase of our farm in the Eastern Cape was chicken feed by comparison. I just started counting the emails that I had received regarding the purchase and stopped counting when I got up to 110. Because of a couple of spine operations that I had more than 25 years ago, I am unable to lift anything weighing more than a few pounds, so Liz has been doing all of the heavy liftings. I do what I can with a trolly while she is at work. 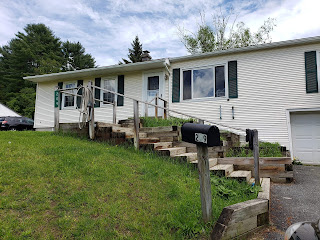 Today was a first for me with our ride on lawnmower, which we picked up second-hand after closing. I had never driven a ride-on before so it was all new to me, but I did manage to cut a patch of  2,000 square feet in our back yard this afternoon before the first rain shower. I still need a lot of practice though. I turned 79 last month so I have every reason to be proud of myself. Fortunately, we have a very friendly neighbor who mows our front yard whenever he does his own.

I took my Jeep Liberty in for a service eleven days ago and still have to get it back - there was a problem with the gear selector that I told them about, and as a result, it needs a new valve cover fitted at a cost of a little under $2,000 - it never rains but it pours..

It is a couple of days now since I started this post. I have been busy moving and emptying boxes. Yesterday I got our hifi (if you can call it that) and treated myself to opera highlights for much of the day. Today has been a lazy day. My back has been playing up so I have been taking it easy for a change, Liz has the morning off tomorrow (Saturday) so I'm looking forward to passing the whole weekend with her for a change.